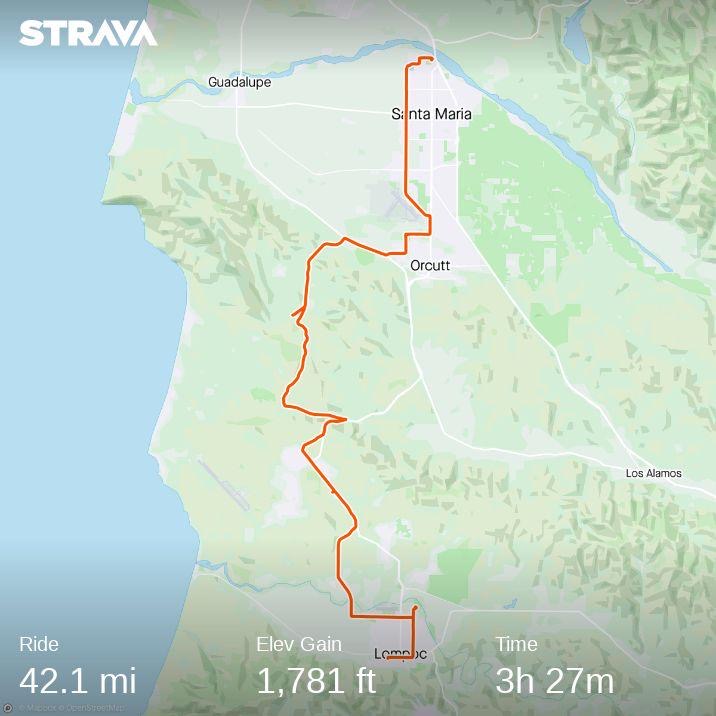 Two things were different on Day 5. First, my alarm went off at 5 am instead of 4 am because the route was only 42 miles. There was no point riding out early since camp would not open until the usual 1 pm. Also, Day 5 is Red Dress Day. We wore red on Day 5 to raise AIDS awareness.

Waking up at 5 am made put me in a good mood. I was extremely happy packing up my luggage and tent in the sunlight. 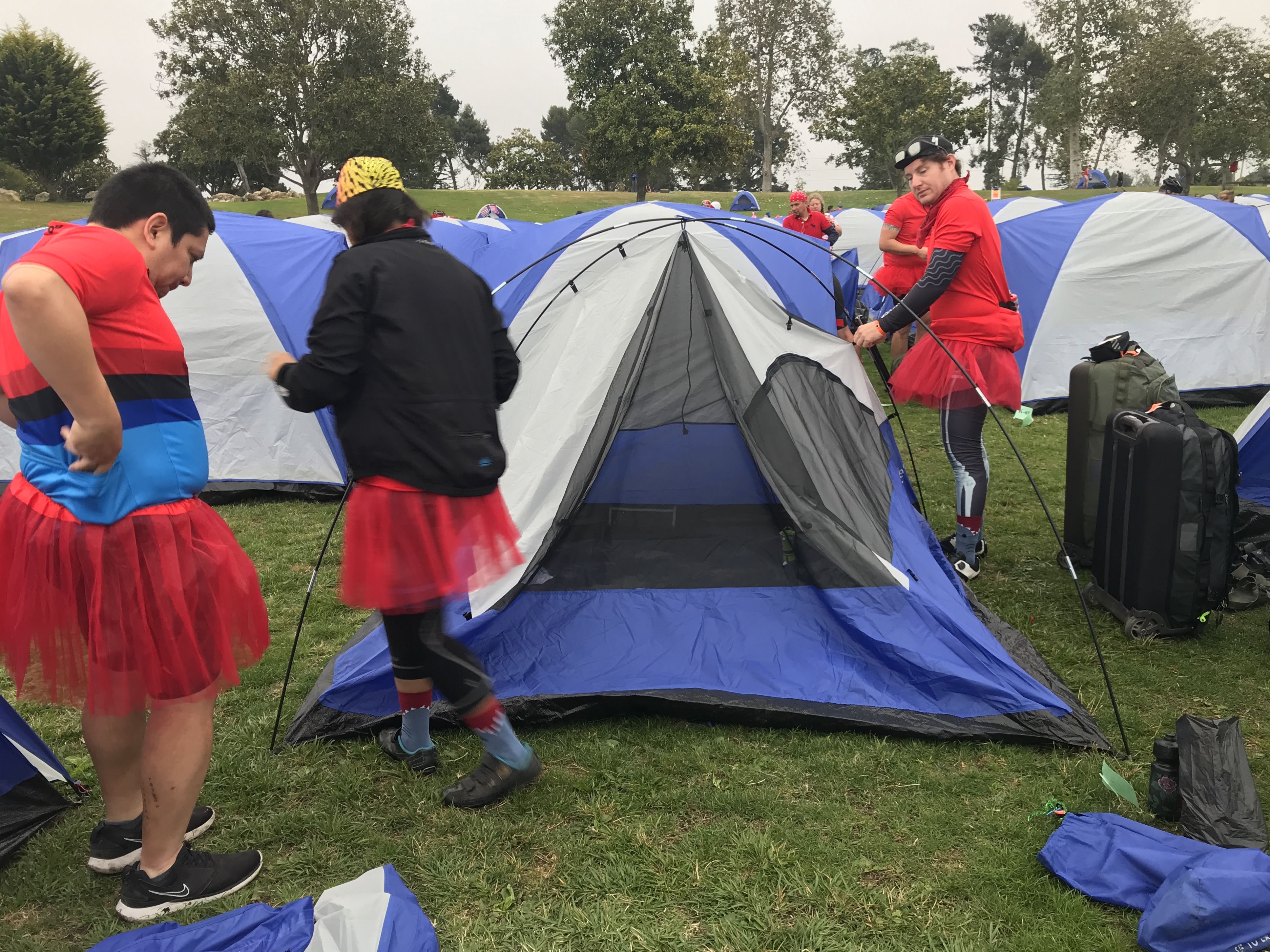 Because of the later start on day 5, I didn’t have to rush to pack up and change into my kit right away. I went to sports med before I changed into my red kit. Sports med had difficulty taping my hamstring the day before since I was in my bibs. It was much easier taping in running shorts than in tight cycling bibs.

My team captain got everyone red tutus for Red Dress Day. I wasn’t very willing to wear a tutu, because I already had a red-colored kit for the day. Mostly I was worried about the tutu getting in the rear wheel while I rode. I finally gave in and put the tutu on. It was long enough to cover my knees. I was sure it was going to get caught on my bike. My team captain told me I can pull the tutu up to make it shorter, so I pulled it up under my jersey. It looked much better, except for the extra layer of fabric now around my torso. 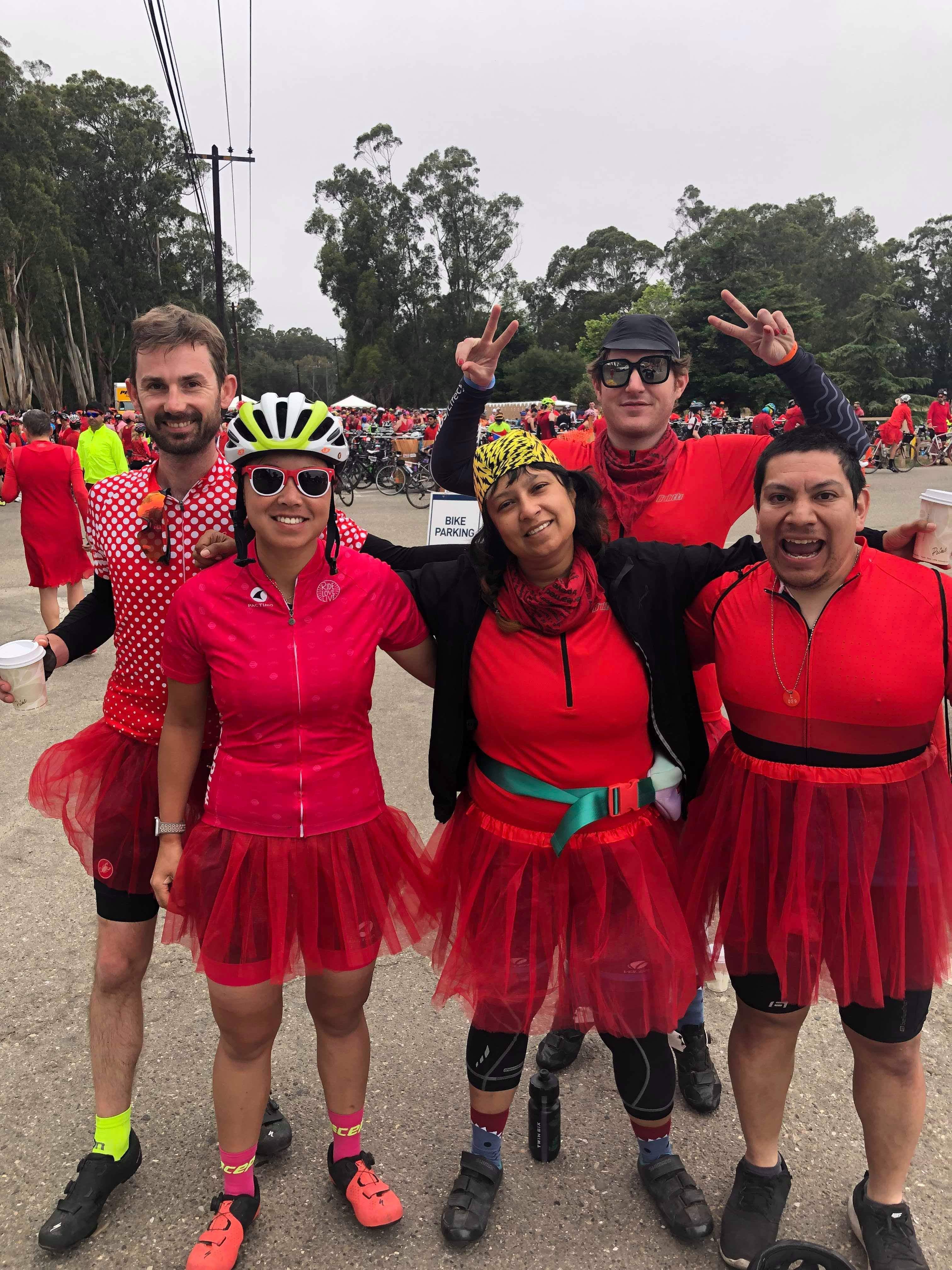 I also brought red sunglasses to wear just for Red Dress Day! No, I didn’t go to Cornell Law School. 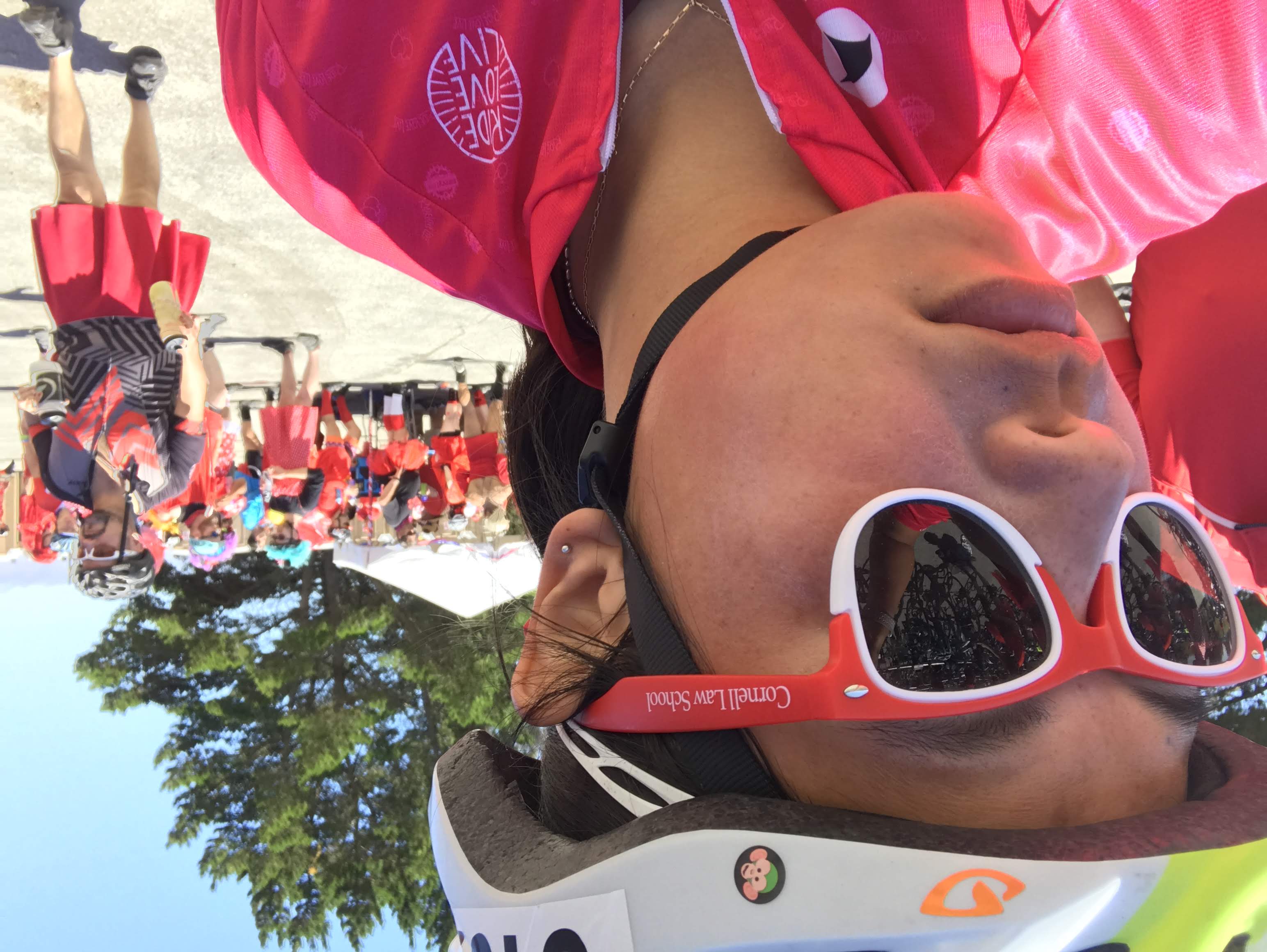 The camp was a sea of red in the morning. It was interesting to see the costumes people came up with. There were no restrictions as long as it’s red and you could ride safely wearing it.

My team and I decided that since Day 5 was a short day, we would ride the entire route together. I was one of the first in my team to pick up my bike that morning, so I ended up hanging out by the exit for a while.

Here are more red dress costumes, all of them far more interesting than mine. I’m not really the into wearing a costume. The tutu was plenty.

I also saw a lady with a stroller in the middle of the exist. I thought her (human) baby was in the stroller at first. Then, I realized the stroller wasn’t for a baby! It was for her bunnies! She was also carrying a kitten! Kind of random… 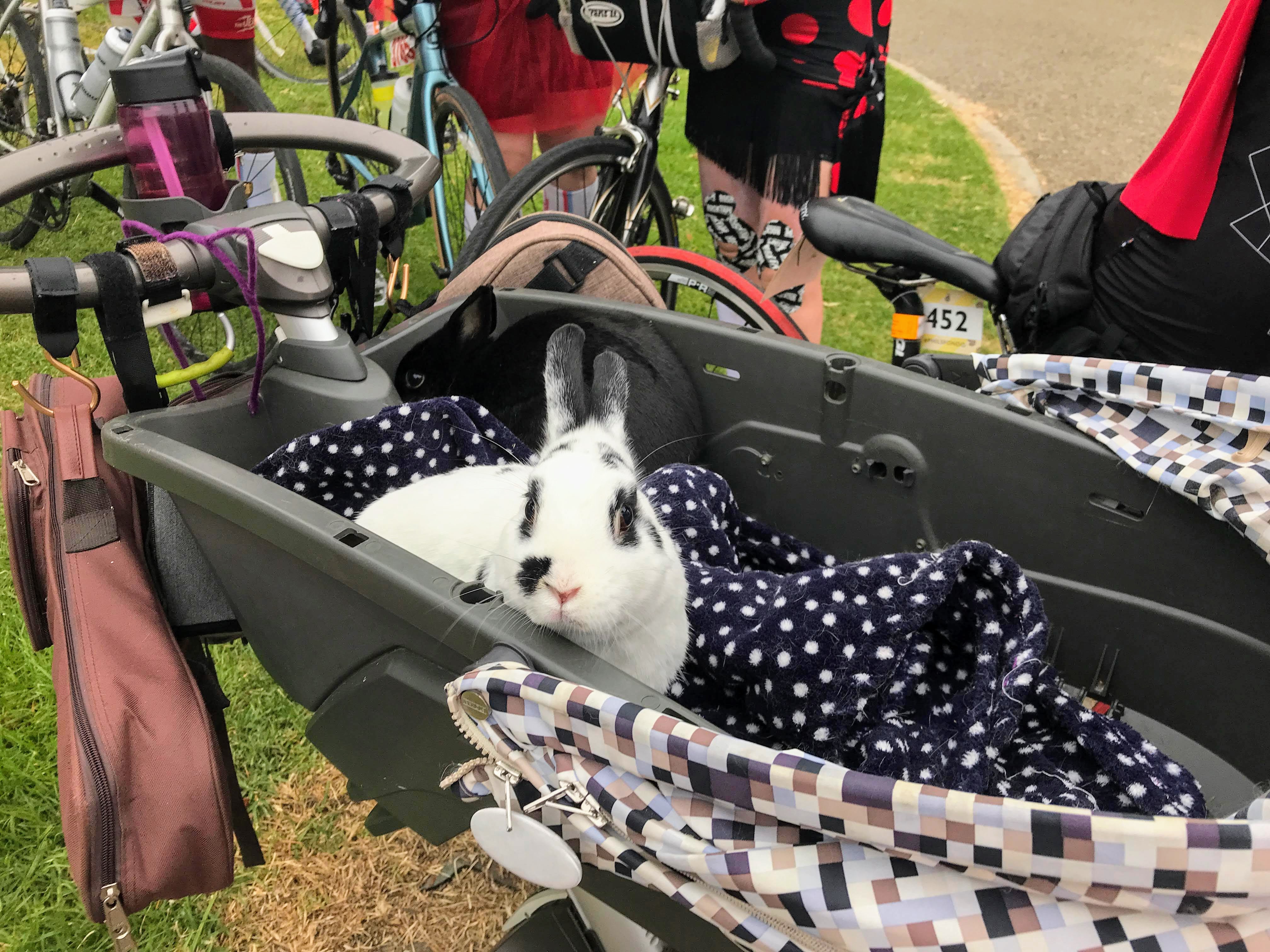 The first couple miles of each day was my least favorite because I wasn’t warmed up yet. I was barely warmed up when we hit the first rest stop almost 10 miles into the ride that day.

I went to the medical tent right away when I got to the rest stop. I started getting blisters on my palms already after Day 1 and they began to hurt more after four more days of riding. I got moleskin to cover up my blisters. This was the first time I got blisters from riding even wearing gloves that I made sure were broken into well before the start of ALC. 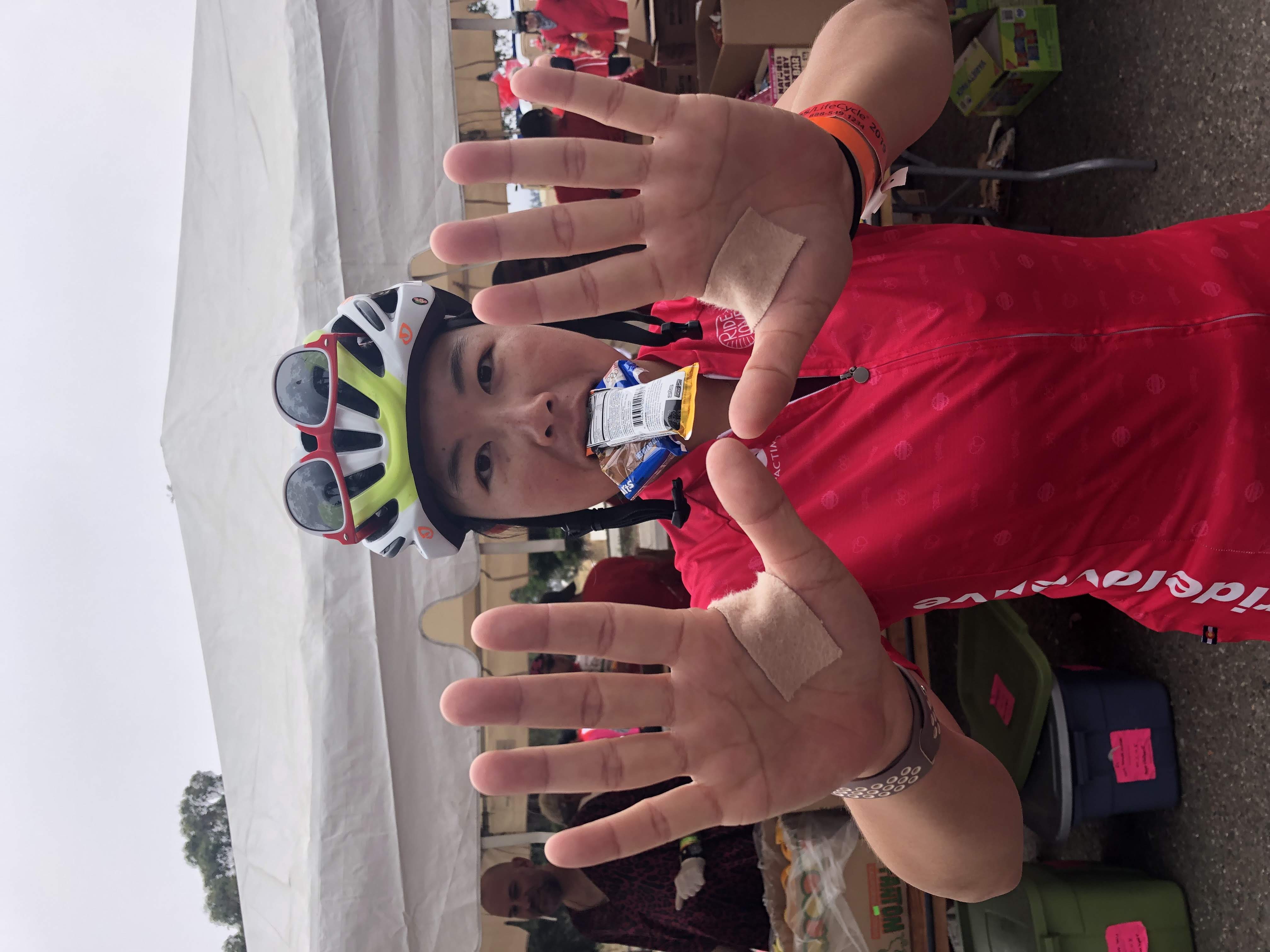 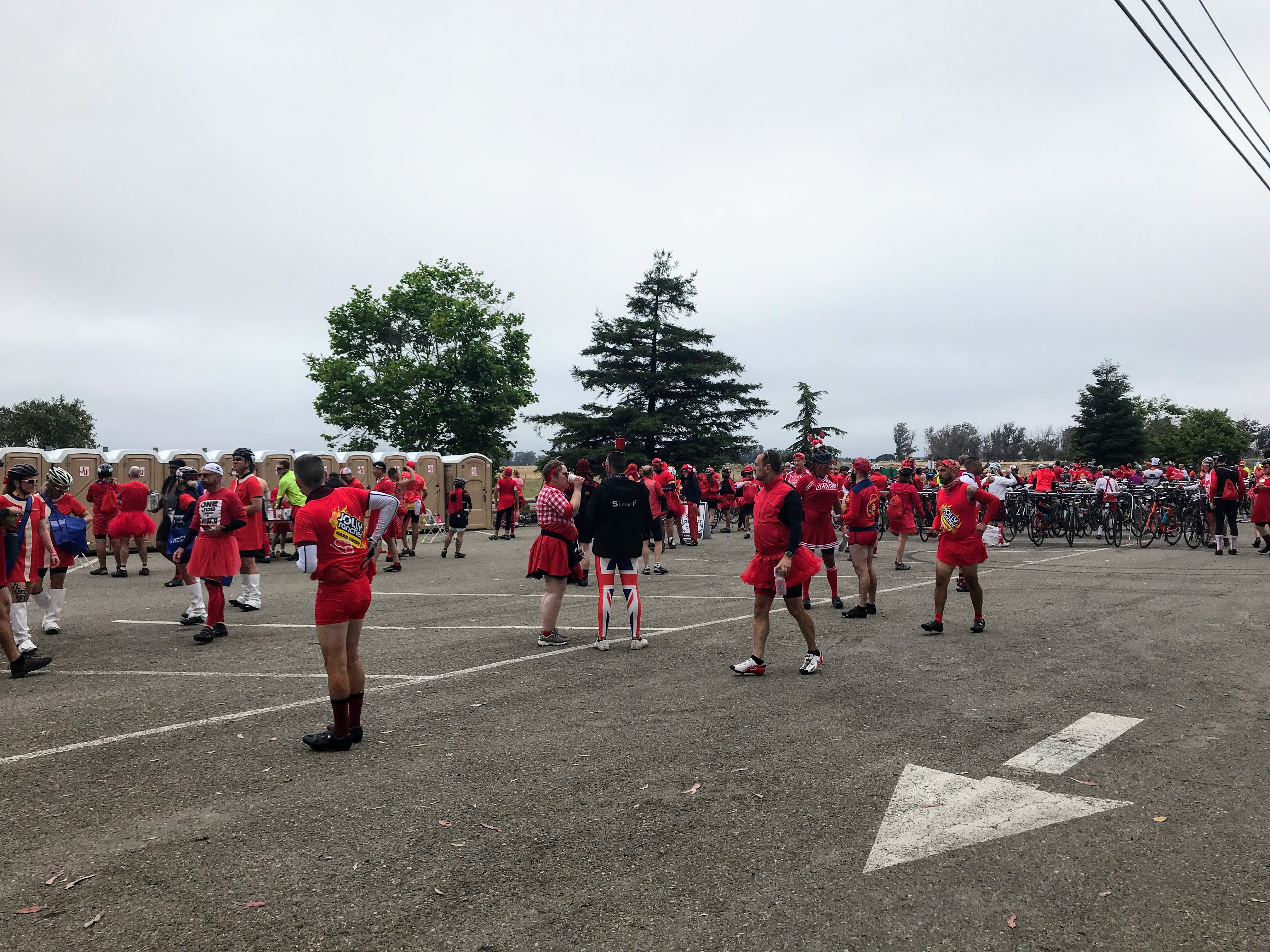 We kept riding after a couple of my teammates got coffee. The next rest stop was near Vandenburg Air Force Base. All of the rest stops had too much dirt and at this point of the ride, I was sick of dirt. Even my face looked like it was covered in dirt, but no, I was just burnt and peeling. 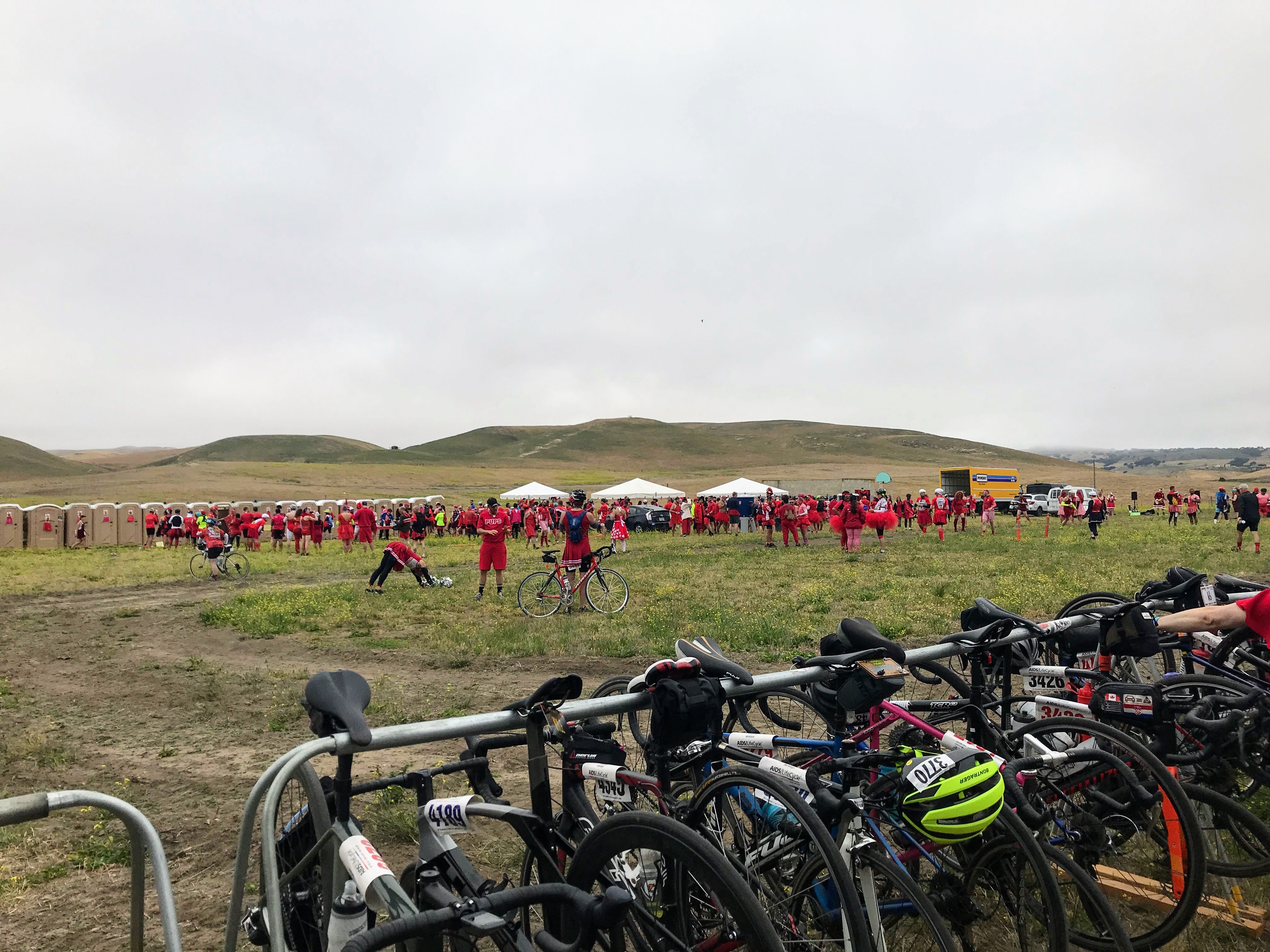 I still had not warmed up even after over 17 miles of riding. It probably didn’t help that we spent more time at rest stops today. As you can see, it wasn’t very sunny. One of my teammates lent me his arm warmers.

Also, I got rainbow cookies at this rest stop. When was the last time I had those? 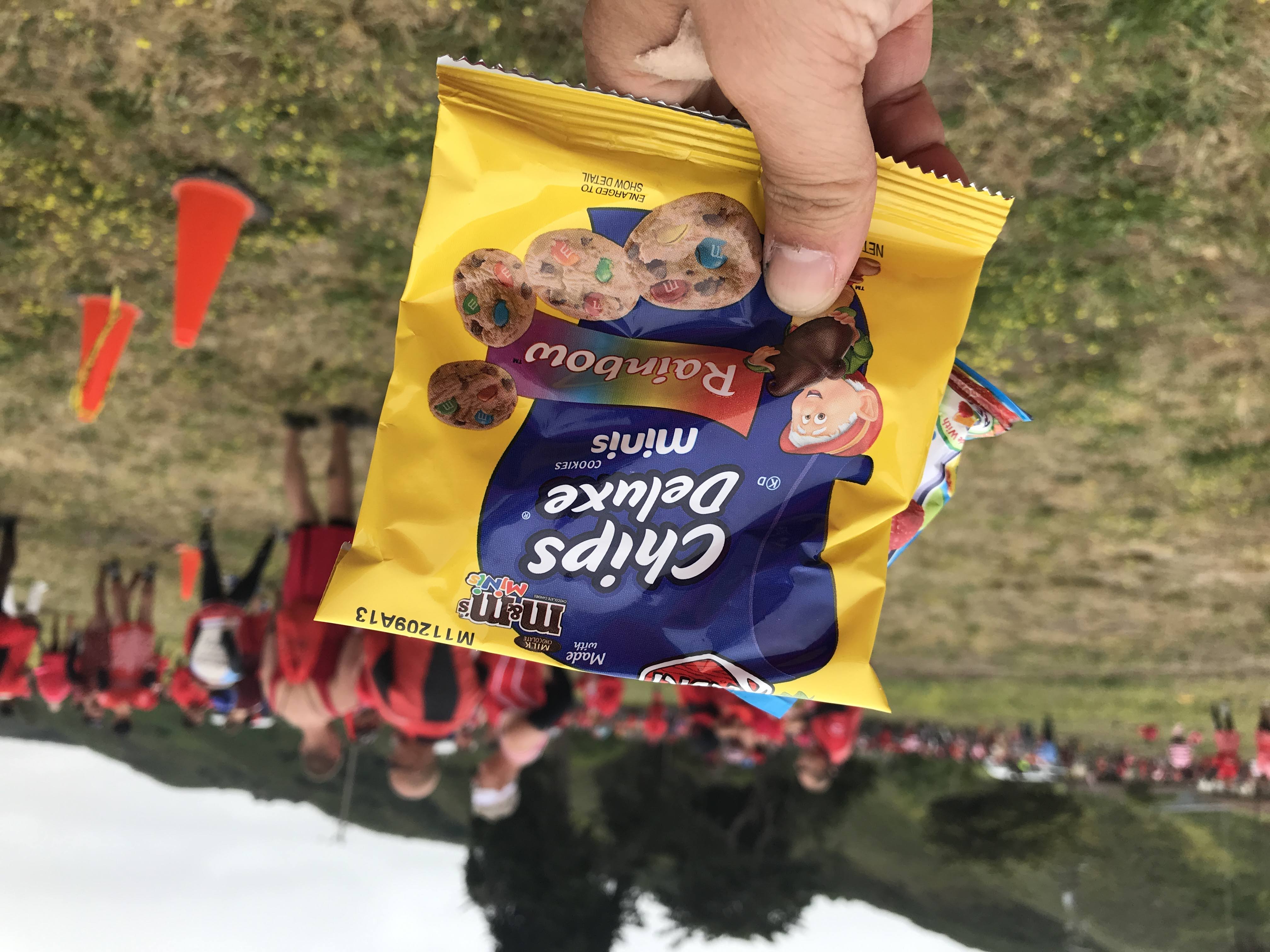 Dirt, dirt, dirt… I had to pull over to scrape all the dirt out of my Speedplay cleats after the next rest stop.

After Rest Stop 2, we tackled the switchbacks that let our red dress costumes form a large red ribbon. 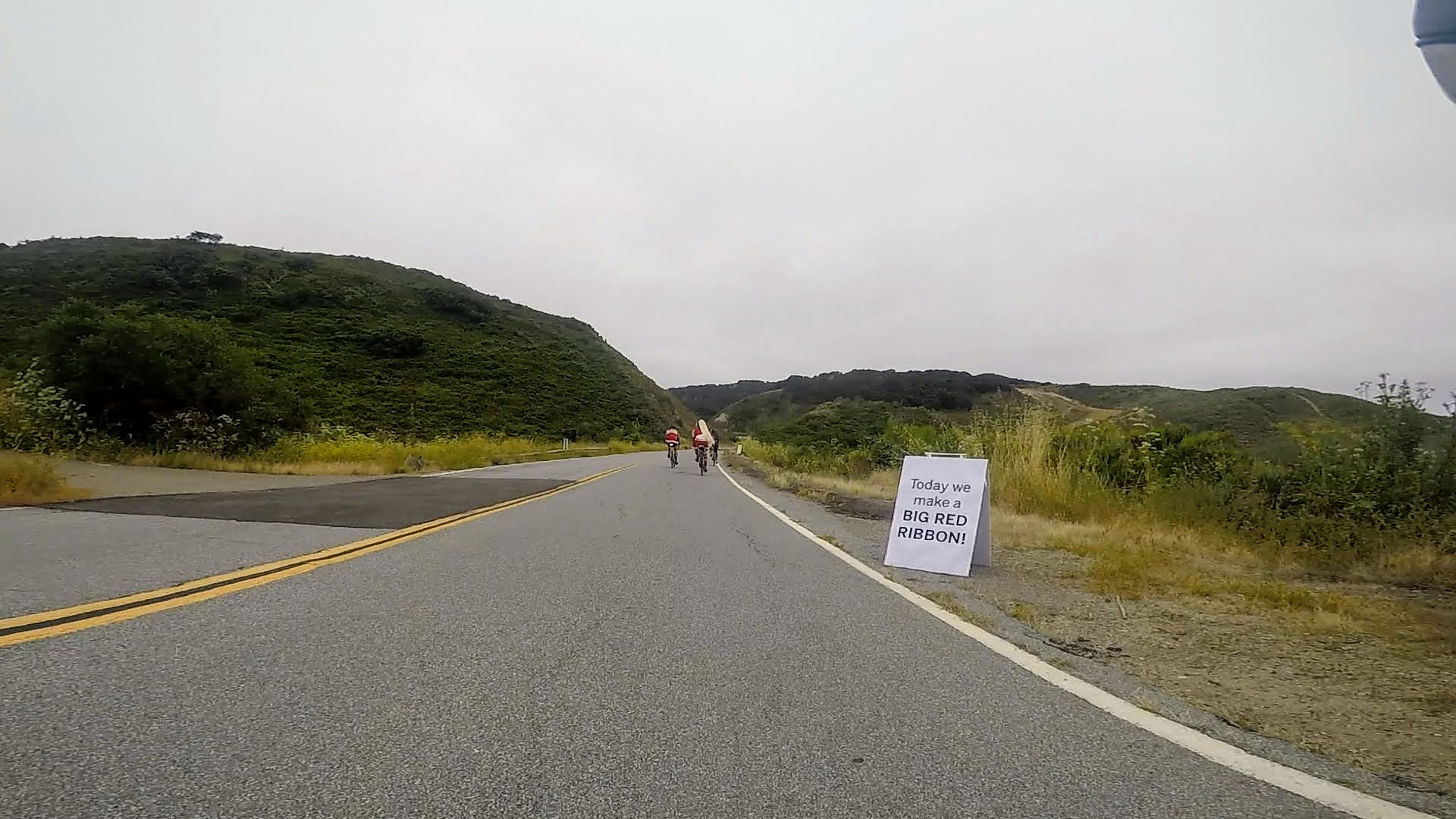 I saw videos of the big red ribbon from past years, but I really didn’t get a good view of it from the bike. Therefore, I don’t have any awesome photos of the ribbon.

There were two nice, similar climbs, nothing too long or steep, that formed the ribbon. I finally warmed up after the climbs and removed the arm warmers. Also, my tutu didn’t get caught in anything, but the extra fabric around my torso felt a little too warm.

We had some awesome cheerleaders on the first climb. 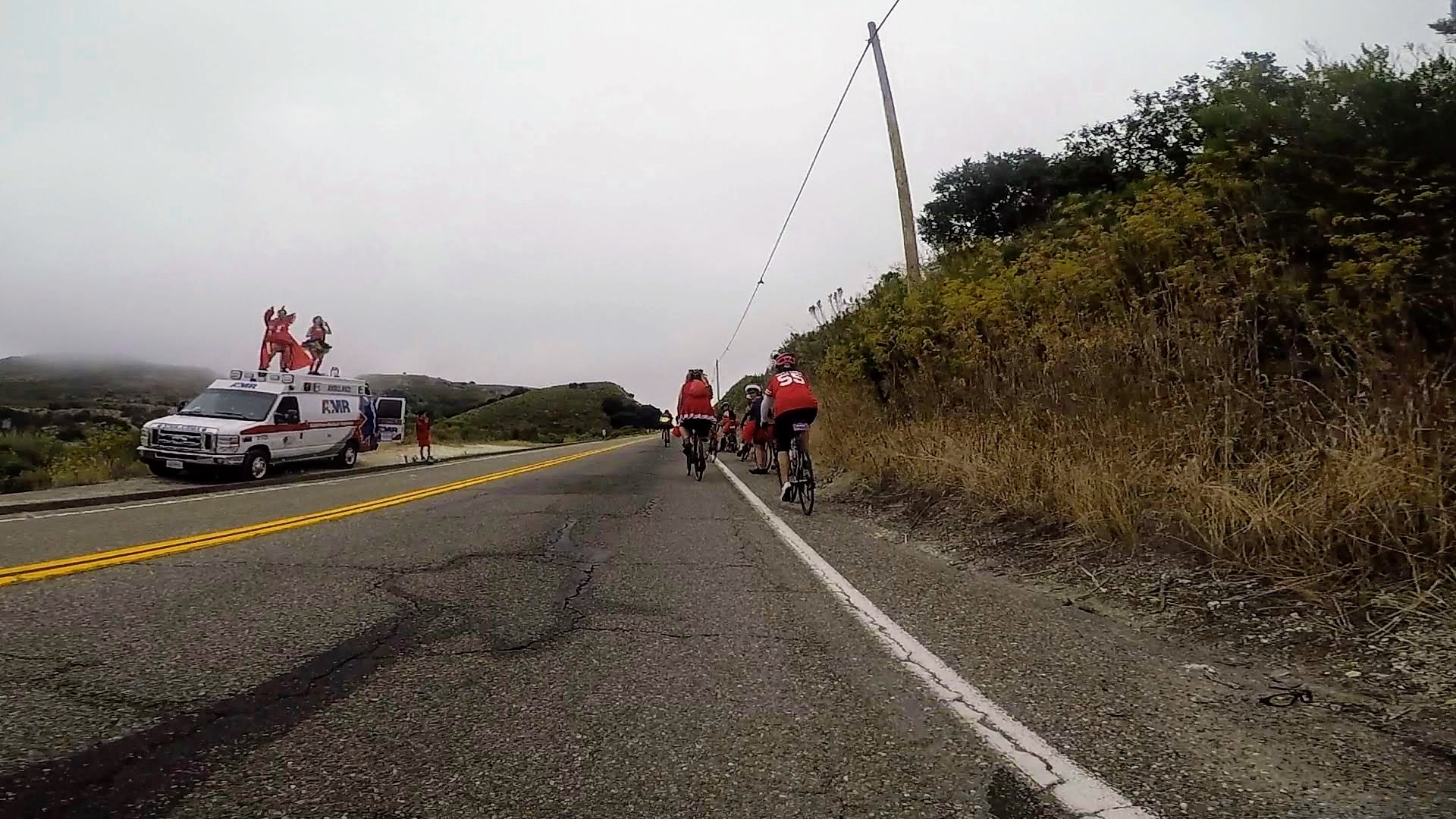 There was a water stop after the big red ribbon. All the rest stops up till now had pop-tarts cut in half, which I actually thought was a pretty good idea, but this stop had full packaged Pop-Tarts. I went with the fudge stripes minis because I haven’t had those in a long time. 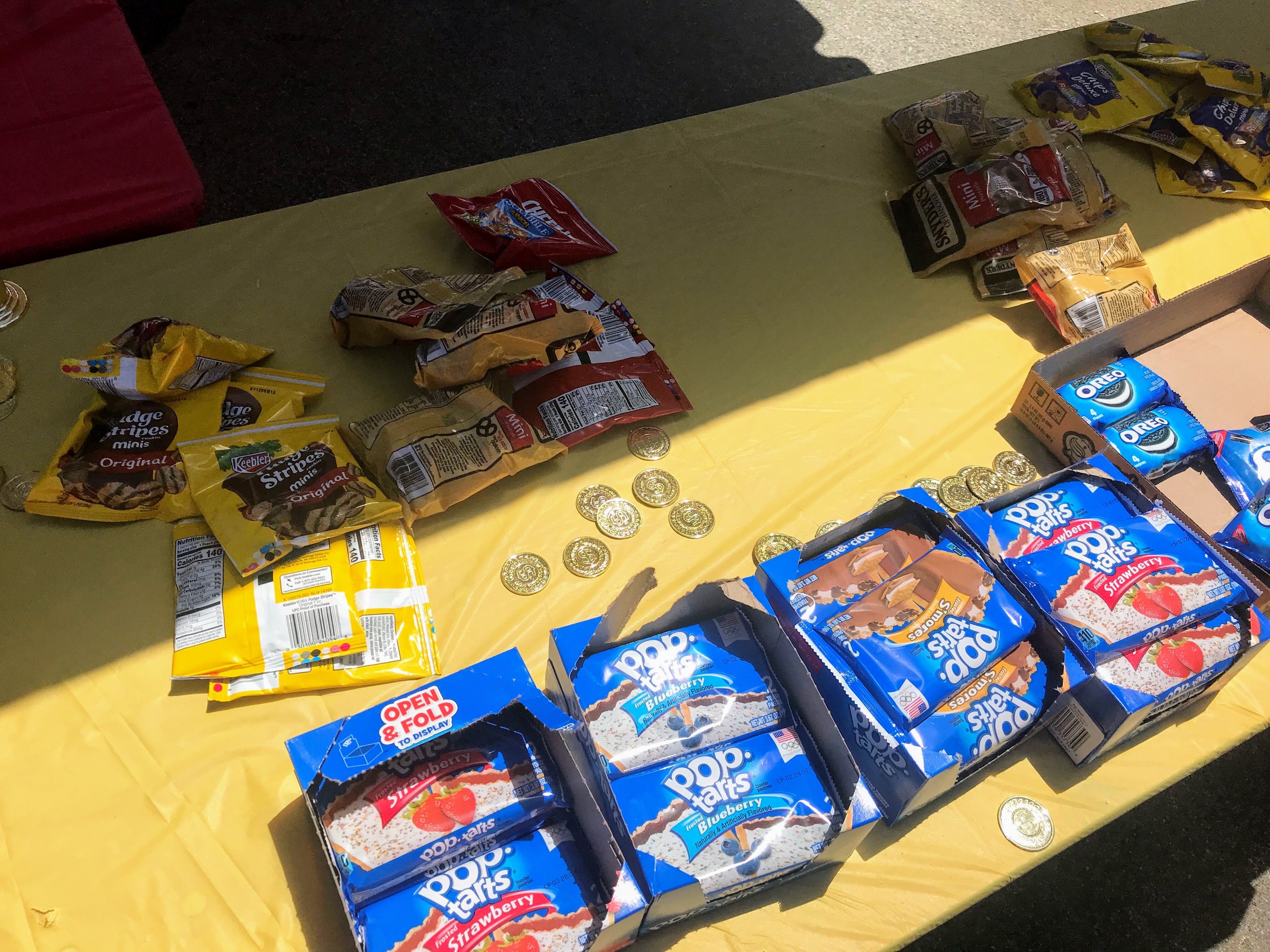 We were welcomed into Lompoc after the water stop. 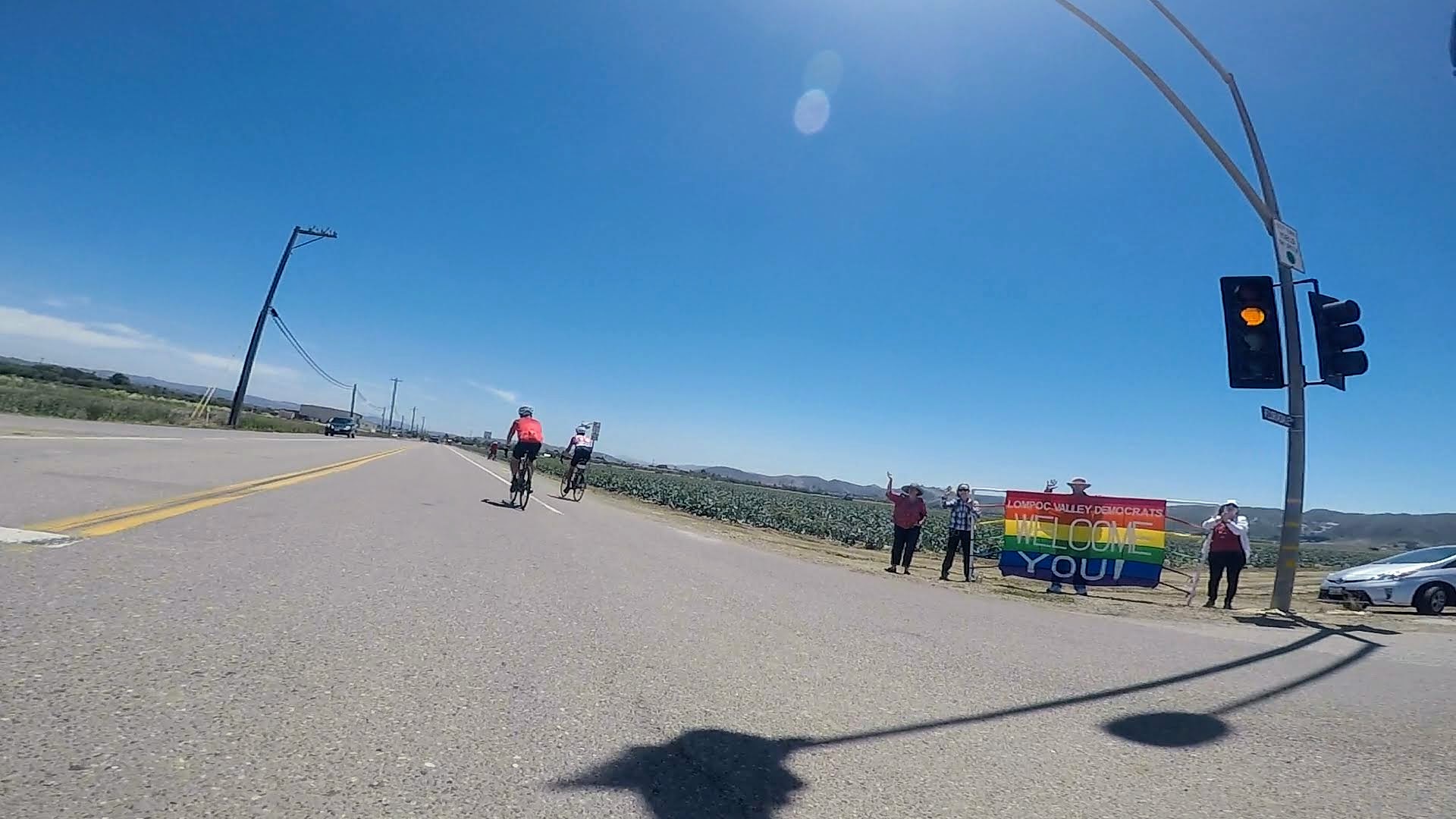 Lunch was less than three miles from the camp that day. I got separated from my team during the descend and I took my time eating lunch since there was no point being quick… or so I thought. I rolled into camp probably past 1:30pm. 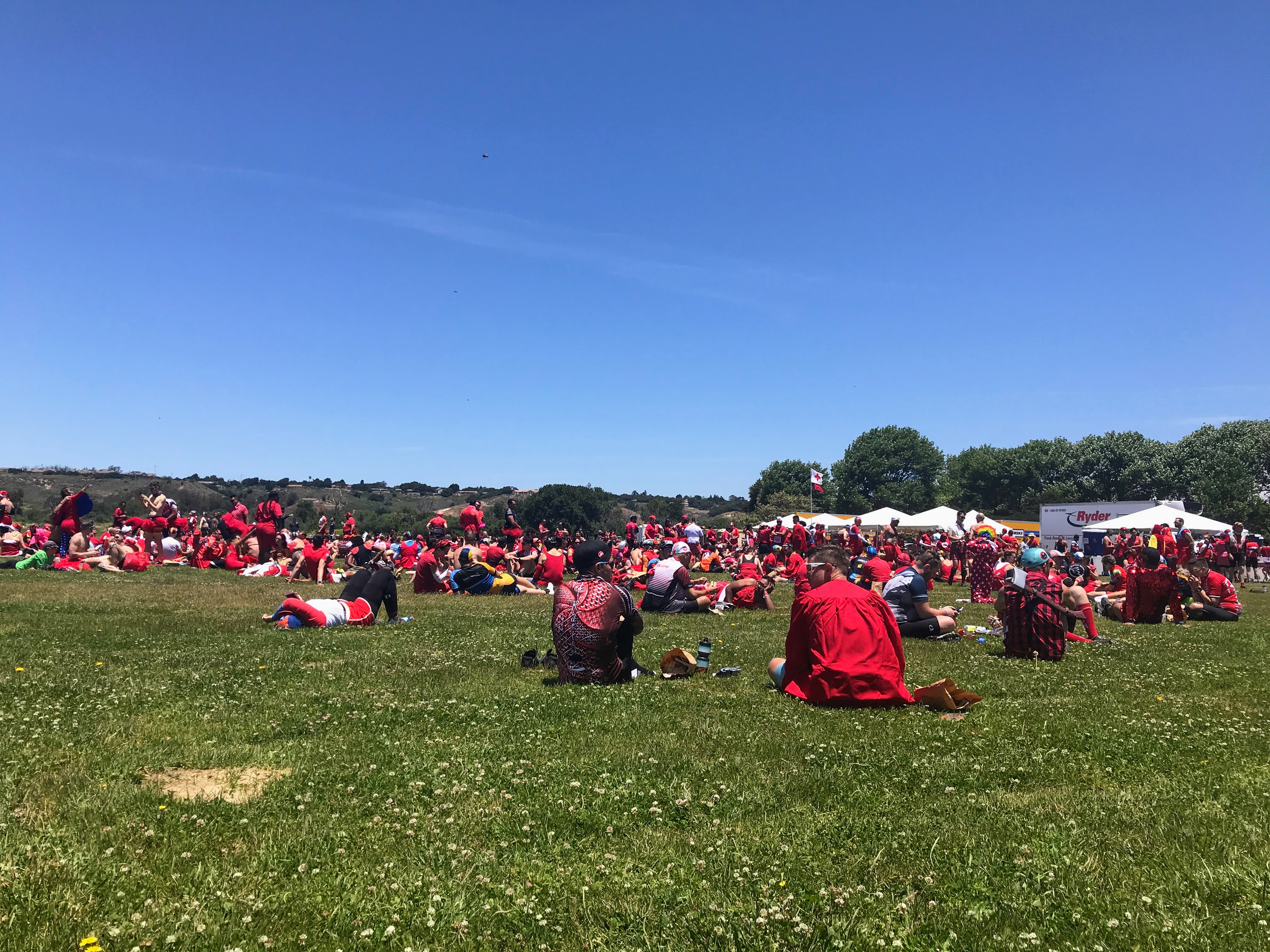 By the time I rolled into camp, a lot of other riders were there already. I should’ve gotten there as close to 1pm as possible. Camp was very different from other days when I faster than a lot of riders and got to camp early. The rest of my team was already there and had already fetched their luggage and tents by the time I parked my bike. For once, my tent mate was there to help me put up the tent, though I think he was more skilled at taking down the tent than putting it up. Ha!

The problem with everyone arriving at camp at the same time was the long lines everywhere. There were long lines at the showers, something I didn’t have to deal with the four previous days. I went to check on the line a couple of times and I decided to wait until the evening to shower. Instead, I changed out of my kit in the tent. I used one of those big body wipes I had packed in to clean up. I got a lot of tiny cuts on my legs from I don’t know what. My guess is from gravel that flew up and hit my legs as I rode.

I wandered around the camp to figure out where everything was. As I was wandering around, walking around the park, it finally hit me that I was really sick of living outside and walking around on dirt all the time. My IT band and hip actually hurt from walking on uneven ground. This was probably one of the reasons why I don’t have a single photo from the camp on Day 5, I was in a bad mood. I was also sick of eating dinner under a tent that was set up on grass or dirt.

I went back to the tent to rest, stretch, and foam roll. Also, my mouth started to feel sore. I googled around for a pharmacy or grocery store to get something to relieve my sore mouth. I also searched for a dessert place nearby. I wanted badly to leave the dirt and go on an outing There was nothing within walking distance. I decided to check out the camp store after dinner to see if there was anything to help the sore mouth. The camp store had mouth wash, but I was already using mouth wash every day. More accurately, I was using mouth wash tabs, so I didn’t have to carry enough mouth wash in liquid form for the entire week.

After the camp store, I started getting a headache and felt like I was coming down with a cold. I quickly went back to my tent to rest. This was not the time to get sick. A friend stopped by the medical tent and got me some medicine. I caught up on some texts from friends and fell asleep after that. I didn’t even know when my tent mate came back from watching the talent show that night.